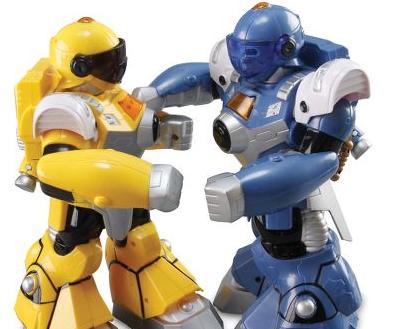 Robots that do nothing but bash each others’ heads are always fun.  It fulfills the bloodlust without any blood.  Heck, they’re robots – they can take the beating.  The good old Rock ‘Em, Sock ‘Em Robots of yesteryear gets a modern twist with the Motion Mimicking Robotic Pugilists, fighting piles of plastic and electronics that mimic the motions of their human masters.

Just like Wii Boxing, you hold on to sensor-equipped controllers on each hand, performing attack motions that your robot toy faithfully mimics.  Instead of having to watch the ensuing mayhem on a TV,  though, it happens right in front you – with real robots to boot.

Each of the controllers (two for each robot – one left, one right) are fitted with accelerometers and tilt sensors, ably detecting every punching movement you perform.  You can have your Motion Mimicking  Pugilist throw a 1-2 combo, parry with the left and deliver a finishing blow, all while you’re performing the exact same actions.  The sensors are limited to punching, though – you’ll have to use the directional buttons on the controller to make them move (in case you’re getting beaten up badly and need to back off).

Unfortunately, the melee is less violent than I would have liked.  It’s geared for little kids, after all.  As such, only attacks to the center of the chest (where four lighted LEDs sit) are counted.  Each hit on that area kills one LED off – hit it four times and the sucker in front of you conks out.

The Motion Mimicking Robotic Pugilists require lots of batteries to run and are available for $79.95 a head.  Naughtier kids (probably you) bored by the rather tame brawl should be able to duct tape nails and spikes to those fists for additional fun.  That should prove especially entertaining when killing your sister’s Barbie collection.  Send us pictures of the resulting carnage.