Hate The Outdoors? Blast Away At Flying Discs With The Indoor Skeet Shooter 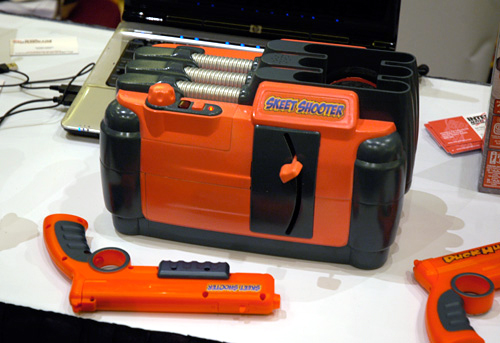 Like Skeet Shooting, hate leaving the house?  No need to force yourself to soak in sunlight with Interative Toy Concepts’ upcoming Indoor Skeet Shooter, which lets you play the gentlemanly English sport right in your living room.  That’s if you have the headroom to accommodate flying discs, of course.

Sounds ridiculous?  Yes it does.  They use real shotguns when playing the game outdoors, so bringing it inside might seem like a recipe for disaster.   Of course, the game replaces bullets with infrared, so you avoid the almost-guaranteed results of blasting the lighting system, the ceiling and the roof when you use a real pistol.

Currently in prototype stage, the game includes a device that sends three collapsible discs soaring through the air.  You shoot at them with your IR gun.  Once you hit a disc (i.e. your sensor connects with its sensor), it breaks apart.  Since it’s only pretend shooting, the discs can be reassembled over and over for unlimited play.

Despite the rather absurd premise of Indoor Skeet Shooting, it sounds like the game could make for loads of fun.  Sure, it’s not as half as thrilling as exploding discs in the air using an armed rifle, but it should prove cheaper and safer.  Plus, you can play it in the office, in the bathroom and pretty much anywhere you please (provided there’s enough space between the floor and the ceiling).  Yet another reason to lock yourself indoors.

There’s no word on how much Interative Toy Concepts will be pricing the toy.  It won’t be coming for a while, though, as they’re targeting release right before the 2010 Holidays.