Plen Robot Is A Droid For Your Android 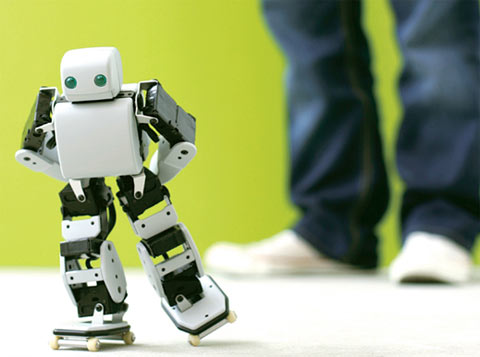 Got an Android-powered phone, want your own robot?  Akazawa Japan’s Plen robot literally writes its own pun: it’s an Android Droid – a droid that can be controlled using Google’s Android OS and he looks awesome.

Billed as the world’s first “Desktop Hobby Robot,” Plen can be controlled over Bluetooth using a bundled app designed to run on smartphones with the open-source OS.  It won’t destroy your enemies, take out the trash or do anything useful, but it can perform a bunch of actions that should deliver some entertainment your way.

Plen stands just a little under 9 inches and weighs a little over 1.5 lbs. Boasting 18-degrees of freedom, it can manage some nifty actions.  It maintains balance using built-in gyro sensors, allowing it to skate and dance without risk of falling over.   Getting it to walk right into a wall not fun enough for you?  Slap on the included skates and have it gliding on wheels – right before you have it slam onto the same wall.

Robots can be cute too and this versatile pile of circuity definitely fits that bill.  We’re not sure if you can hack it to perform other motions (such as dropping a grenade after amusing you with its impressive skating performance), but those 18-degrees of freedom almost guarantees that someone’s bound to try.

In the event of a machine uprising, the Plen could become the first-generation of entertainment robots.  If a dancing and skating robot can keep you occupied, it should do the same for armies of battle-worn robot soldiers.  Only 50 of it will be made, with plans to release more depending on the resulting interest.  Price is listed at $2,999.