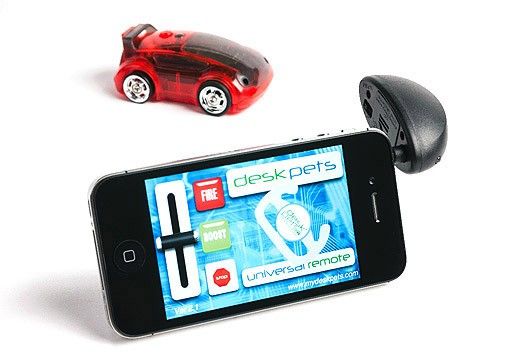 I love Desk Pets’ smartphone-controlled toy cars.  However, driving a toy tank around a maze feels a little stupid, when all you really want to do is fight them to the death.  That’s why we appreciate the new Desk Pet CarBot, which features a battle mode for pitting multiple vehicles against one another.

Designed to work with both iPhone and Android smartphones, the vehicles can be piloted directly from the downloadable app, which also records all the statistics for the vehicle’s performance during the different game modes.  While they can’t quite wreck each other during head-on collisions yet, the vehicles can now “fire” at each other.  The bullets are invisible, though, so you have to use some imagination, although the sensors and the apps should do a good job of recording all hits accurately. Take too many hits and your car will be unable to continue running. 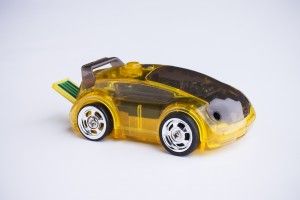 Billed as a “micro-robotic race car,” the CarBot features four playing modes: the aforementioned Battle mode; Drift n Race for full speed racing and drifiting competition; Maze mode, where you let the car operate autonomously, finding its way past any obstacle course  you create; and Personality mode, where the car just goes bonkers running all on its own.  Each car can be paired to one smartphone using an included dongle that plugs in to the headphone slot.   Onboard battery’s running time is about 25 minutes of play, which you can then recharge via USB for 40 minutes to get a full top-up.  Up to four vehicles can battle at any one time.