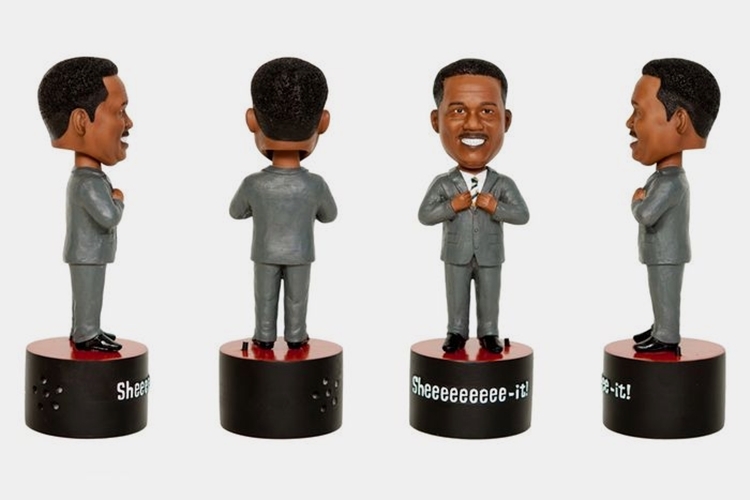 You can hate on Senator Clay Davis all you want, but the man has a way with words. Who else can admit to taking drug money and come out looking like a pillar of the community? No one but the man who can take an overused expression, overuse it to death, and come out making it sound absolutely fresh. Sheeeeee-it. And now, you can have him overusing that same expression for your amusement with the Isiah Whitlock, Jr. Talking Bobblehead.

That’s right, the actor behind the Clay Davis character from The Wire actually has a bobblehead of himself, decked in Clay Davis threads, saying “sheeeee-it” over and over. Something bad happened at the office? Press a button and let the man air out your frustration. You get a phone call about something amazing? Press a button and let him express your glee. Bored with nothing better to do for the rest of the day? Same thing.

The Isiah Whitlock, Jr. Talking Bobblehead comes with three pre-recorded phrases: “Sheeeeeeeee-it,” “HmHmHm, you don’t know sheeeeeeeee-it,” and “Mmhmm, sheeeeeeeee-it.” There’s only one button, so you can’t exactly choose which one you’ll get, but let’s be honest, all of those can mean the same thing, regardless of the context anyway. It features a detailed sculpt of the senator’s head bobbling endlessly from side to side, complete with that manicured stache, pearly whites, and trademark shit-eating grin. Dimensions are 24.5 x 11 x 11 cm (w x h x d).