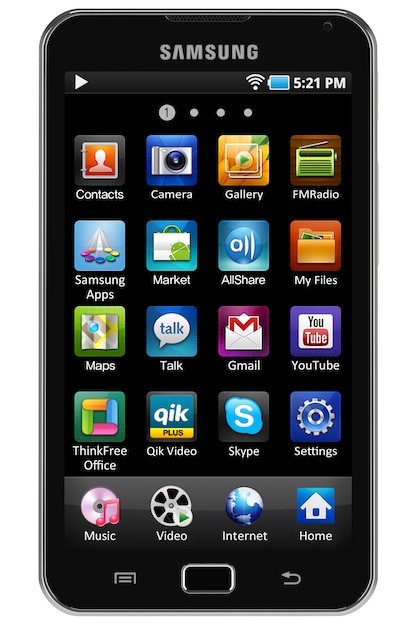 Some people would rather have an iPod Touch than an iPhone — that’s a fact that’s been made obvious by Apple’s sales figures for the Touch over the years.  The Samsung Galaxy Player  takes off from that mentality, bringing the same features of their Galaxy handsets minus the cellphone and 3G parts.

Available in two sizes (4 inches and 5 inches), Samsung is calling it a “media player,” rather than lumping the product in the fast-growing tablet category.  Both look just like standard Galaxy handsets, minus the phone receivers, and could be just as pocketable, weighing in at 5 and 7 ounces, respectively.

The Samsung Galaxy Player comes with a capacitive touchscreen, with the 4-inch version getting a Super Clear LCD and the 5-inch unit sporting a regular TFT LCD.  Details include a front-facing VGA webcam, a 3.2 megapixel camera in the rear (with flash on the 5-inch model), WiFi, aGPS, DLNA support, stereo speakers and microSD card expansion (up to 32GB).  It uses the Sound Alive sound engine for audio processing.

Consumers can use the player for internet calls over WiFi, with both Skype and QIK preinstalled.  It runs Android 2.2 Froyo, which means Flash 10.1 support, along with an upgrade path to 2.3 Gingerbread.  All regular Android apps should run without hitch on both models, so it’s essentially a Galaxy S for media and software.

Price has not been announced for the Samsung Galaxy Player 4 and 5, but they’re slated for a US release sometime in the Spring.