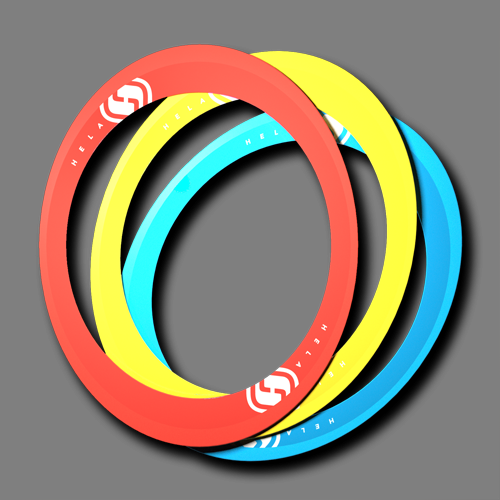 We all love to throw stuff.  Hence, the sheer brilliance of a “throwable” robot and the timelessness of the frisbee.  Over the years, we’ve seen various redesigns of that basic throwing disc.  The Hela is one of the newer breed.

Unlike a regular frisbee, it’s got a large hole for air to pass through in the middle.  Unlike the donut-shaped Aerobie, it’s actually more oblong in form — like a slice of hard-boiled egg with the yolk taken out.

Why the unusual shape?  According to the Hela website, the shape, the extra curves and all the other micro-features are intentional elements that all contribute to its impressive performance.  By that, they’re talking about its ability to endure wind gusts of up to 15 mph and to reach way-out distances of over 150 feet, all while weighing a mere 90 grams.

Getting the self-leveling disc to fly towards the direction you want is a bit more complicated than a frisbee, though, so make sure to do a few practice runs before trying to send it over a cliff to the other side (unless you’re fine losing one forever).  Once you get the hang of it, however, getting the thing to slice through air accurately is supposedly easier than even the most traditional throwing discs. Amazon has it for $18.95.